In case you aren’t sure of the title… it's Labor Day. The Backwards Holiday. Every year when it rolls around I wonder why it’s named Labor Day. Since it’s a Holiday intended to be just that, a Holiday – I would think a better name may be Relax Day or Lazy Day or Off Day or Sleep in Day, maybe even Do-Nothing Day, something other than Labor Day.  After all, we know what Labor means.  And many will likely be celebrating Labor Day by Laboring.

Labor Day came about because workers felt they were spending too many hours and days on the job. 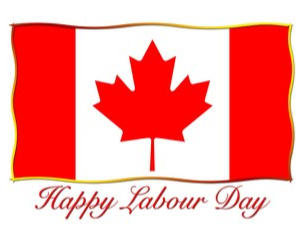 These long working hours caused many union organizers to focus on winning a shorter           eight-hour work day. They also focused on getting workers more days off, such as the Labor Day holiday, and reducing the workweek to just six days.

These early organizers clearly won since the most recent data show that the average person working in manufacturing is employed for a bit over 40 hours a week and most people work    only five days a week.

Surprisingly, many politicians and business owners were actually in favor of giving workers more time off. That’s because workers who had no free time were not able to spend their wages on traveling, entertainment or dining out.

As the U.S. economy expanded beyond farming and basic manufacturing in the late 1800s and early 1900s, it became important for businesses to find consumers interested in buying the products and services being produced in ever greater amounts.   Shortening the work week was one way of turning the working class into the consuming class.

So, to celebrate the month of September and the affection for Laboring, I have a special announcement to make: I will be Labouring, but for a very special reason.

My team and I are addicted to helping you and those you know buy or sell the place they call home.  In fact it's a race to help as many as possible so we can GIVE more away.

A CORE philosophy at our company is ‘the size of the hole you give thru is directly proportionate to the size of the hole you receive thru’.  This is why our Mission is to Go Serve Big!!!  Serve you, serve those you refer to us and of course, serve a very worthy cause… the great work being done at The Royal LePage Shelter Foundation.

To refer your friends, neighbours, associates or family members simply fill out the form, or you can call me direct at 416-272-6363, as well.

Click here to check out prior month's newsletters on our blog

With all my appreciation.

To continue searching, you must agree to the Terms of Use.

For the best experience, please provide your cell phone number and select accept below to opt-in to our Terms & Conditions and Privacy Policy to begin receiving text and voice communications.

or make a new notebook

The Toronto MLS® requires registration to view all homes currently for sale.
(Prices and inventory current as of April 16, 2021)

Have a house to sell?

Find Out How Much Your Home Is Worth (optional)

We just need your phone number to finish creating your account.